In memory of Marc Sylvestre
The Sturgeon Falls Curling Club was given a plaque by Jeannette Sylvestre in memory of Marc Sylvestre, to honor an Annual Volunteer. Club members could submit their choices during the season. This year, it was awarded to Nick Rankin, for his continued efforts on and off the ice but mostly for his numerous hours from September to April on ice preparation and upkeep. An “Ice Man” needs to have precision and knowledge of the trade in order to provide good curling ice and that’s exactly what he has. His contribution to our Club can now be highlighted! It goes without saying that a club does not survive without VOLUNTEEERS. Congratulations Nick! 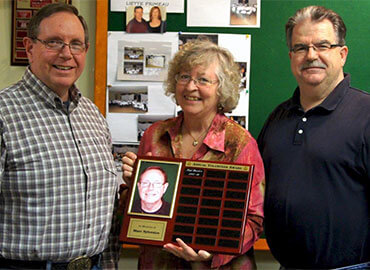 Every year the Sturgeon Falls Curling Club hosts a Mixed, Ladies’ and Men’s Bonspiel. The club also hosts other Funspiels and special events throughout the season such as our Christmas Party on Dec 13, 2014 in conjunction with the West Nipissing Chamber of Commerce.

LEAGUES FOR ALL AGES

We offer a Senior’s drop in league on Monday and Thursday, a Tuesday night ladies’ league, a Wednesday night men’s league, a Thursday night business league open to both men and women as well as a Friday night mixed league. We also have a youth curling program that meets every Sunday.